Welcome to the November 2022 release of PHP Tools for Visual Studio!

Highlighting scoped keywords such as while, do, for, switch with the corresponding break and continue. 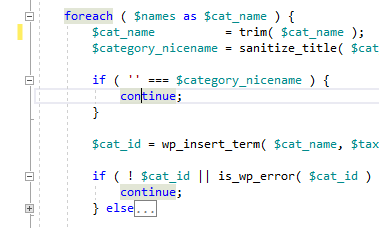 We have updated integrated language manual with more type informations, fixed type annotations for various PHP constants (which have it incorrectly in the official PHP manual), and more. This results in more precise IntellISense, type analysis, and code diagnostics.

Next, the editor supports the false pseudo-type as a part of PHP union types.

We're improving inline completions. Upon typing function getSometing, the rest of the getter method is smartly completed, if there is a property $Something in the local class scope. The same with function setSomething ...

Diagnostics in general have been improved. We have fixed a lot of falsy warnings, and improved analysis performance.

Newly, the PHP Editor recognizes pseudo type never as well. In case you're annotating never-returning functions with the @return tag.

We have improved tool-tips, which now render HTML annotations such as <b>, <code>, <br>, etc. nicely.

We have released an update for older Visual Studio versions! If you're still using Visual Studio 2010, 2012, 2015, or 2017, you can now update to get almost all the latest features, PHP 8.2 support, fixes, new diagnostics, and more!

There are downloads for specific Microsoft Visual Studio versions:

There is vast array of fixes in code analysis, code highlighting, and finding symbol references. See the list below for details: